skip to main | skip to sidebar
ZAKHOR
(a personal account) 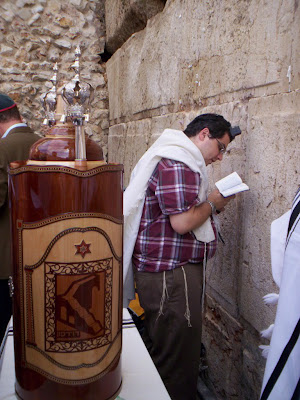 
My name is Juan Mejía. The short version of my story (the long one would take too long and is much better in person) is as follows. I was born to a middle class Catholic family in Bogotá,Colombia. I was privileged enough to be accepted in an elite Catholic school for boys run by American Benedictine monks. There I learned English and developed a strong sense of vocation and religiosity.
When I was 15, while celebrating Christmas with my family, my grandfather revealed to an astonished congregation its Jewish origins. He didn´t know much,just that in his chilhood hacienda the men met twice a day in a special room and prayed with "towels" on their heads from tiny books in a strange language. Later in life when he confronted his relatives concerning the strange traditions of his family, they confessed to him openly that they were, indeed, Jews. This revelation started me on a journey that would end in Jerusalem many years later. While studying philosophy in the National University of Colombia, I became fascinated with Medieval thought and started to read the works of Maimonides and to find out more about the Jews of Spain and what became of them. The knowledge that the blood in my veins had somehow participated in the splendorous Golden Age of Sefarad made me incredibly proud, although at that time I did not consider the option of conversion. Only many years later, while taking a backpacking trip across Europe, did I find my way back to the land of my ancestors: I decided to take a detour and visit Israel. There, in the Western Wall, I realized the incredible injustice that had been perpetrated against my family and my heritage. I decided to correct the historical mistake and cheat the Inquisition by converting back to Judaism.
The trip back was not easy. Colombia, unlike America, does not have a thriving and learned community that is willing, albeit sometimes reluctant, to receive converts. One cannot go into a bookstore and buy a siddur as easily as one can do in America. And most important of all, the doors of all the synagogues- Orthodox and liberal alike- are closed to those who come from the outside, either to learn Torah or to worship. Only through the indefatigable efforts of a wonderful member of the Conservative synagogue in Bogota, a ger tzedek himself, was I able after a couple of years to see the inside of a synagogue. Meanwhile I studied on my own and read voraciously. With the help of my Ancient Greek teacher I started to teach myself Biblical Hebrew. I had a friend in America buy me a talit and I started to daven regularly on my own. I started to keep kashrut and got more and more involved in my observance of Shabbat.
Fortunately, Hashem was very gracious to me. As soon as I finished my undergraduate studies I earned a scholarship to pursue my Master´s Degree in Jewish Philosophy in the Hebrew University of Jerusalem. Back in Israel, I studied voraciously -both in and out of the classroom. Having been denied access to synagogues back home, Ishul-hopped and learned in as many yeshivot as I could, while at the same time studying for my degree. After one year of intense studies, plus my many years of reading on my own, I was ready to finish my conversion which I did under the auspices of the Conservative Movement.
During my last year at the University I started to study Talmud intensely at the Conservative Yeshiva in Jerusalem. There I met my wife, an American student who is now, like myself, studying to be a rabbi at the Jewish Theological Seminary. We even decided to take a full year of intensive study in that Yeshiva as the best way to spend our first year as a married couple: two young Jews in love studying Torah in Jerusalem-what could top that?
Back then, I never thought that the rabbinate was for me. After all, who was I? Just a Jew back from the dark woodwork of the Inquisition after 500 years? Could I aspire to learn as much as people who has been Jewish all their lives and had gone to dayschool? Nevertheless, the thought that in Latin America and in Iberia there are still thousands if not millions of my benei anusi brethren who are denied their birthright to Torah and mizvot made me take the bold step: I would apply to rabbinical school to go back and help correct this mistake. Thank God, like Rabbi Akiva, I was merited to start learning Torah even late in life.
So, baruch Hashem, here I am in my third year of rabbinical school, writing to you from the Holy City of Yerushalayim, hoping that these words communicate to you and the anusim in your community that you are not alone. Help is on the way. In New York I have met at least other three rabbinical students -both in Orthodox and Conservative institutions- who are of anusi origin and who are going to dedicate their lives to this beautiful task of helping our people return to the ways of their Fathers and Mothers. Personally, I am writing a siddur in Spanish for Friday night which, bli neder and be'ezrat Hashem, will be ready this next Hannukah. I have other smaller projects online which I invite you to visit.

If you want to get in touch with me, you can write to me at mikveh.israel (at) gmail (dot) com.

With my blessings of Shalom for you and all your community, 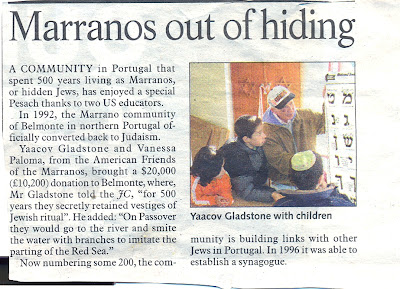 INTRODUCTION
In 1496, king Manuel of Portugal ordered all jews to leave the realm in 10 months, but instead he forcibly baptized them in 1497. Thereafter these Jews were labelled New Christians. Those who secretly continued to observe the essentials of Judaism became known as Marranos. In Hebrew Marranos are known as Anousim, "the forced ones".
For 500 years Marranos were Jews in their hearts but had to pretend to be Christians for fear of their lives. Thousands died in the fires of the Inquisition which lasted 250 years in Portugal. Two to four thousand were massacred in Lisbon during Passover in 1506. Up to two thousand children were forcibly baptized and shipped off to the island of St. Tome off Africa where many died or became slaves. Today, their descendants are longing and struggling to return to their ancestral heritage. The Portuguese Friends of Marranos want to help. It has the following objectives:

1. To strengthen the Jewish identity of Marranos through education.

2. To encourage and support the translation and publishing of important texts by and about Marranos.

3. To work together with other organizations dedicated to helping Marranos regain their Jewish idendity.